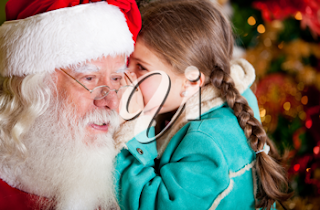 I have a crush on this fellow.  His appeal is unique, he's not typically the kind of guy who inspires infatuation. But there's something in his spirit, in the twinkle of his eye, his generosity, the mystery that surrounds him,  the way he is with children, that I find irresistible.  I flat out love Santa Claus.

Let's face it,  he's held my attention longer than any other man. For me, like most children, the initial introduction didn't go particularly well, but in time I grew to see the kindness shining through that hirsute visage.  And while cynics might believe he won me over with gifts,  I can only say that when I no longer made his list my feelings for him didn't change.  As a parent, now a grandparent, I could never imagine a Christmas without him.

The thing is, while good old Saint Nick may not be the 'reason for the season', there is no doubt in my mind that he too exemplifies a lot of what's right about it.  He gives without getting back (well with the exception of some milk and cookies to help him on his way), he's always ready with a smile,  and most of all he reminds us to keep believing in the magic.

So as he will soon be making his appearance, here are some great Santa collections to get you in the spirit: