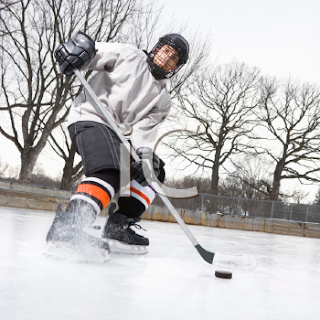 I live in the Great White North, a country that knows cold and snow, though perhaps not as much as our neighbours to the south tend to think.  We do like back bacon (among lots of other things). We make great beer (but  lovely wines too). And we do love our hockey (end of story).

So it is this week that fans rejoice as the end of the National Hockey League lockout has been announced. With some final steps to take,  folks are eagerly awaiting the schedule and drop of that first puck.

Understand, my use of 'we' was editorial regarding this nation's favourite pastime. I did love hockey in the day of the NHL's Original Six — Toronto Maple Leafs, Boston Bruins, Montreal Canadiens, New York Rangers, Detroit Red Wings and Chicago Black Hawks.  Saturday night was hockey night and  I curled up on the floor in front of the TV to watch the Leafs take on their opponent.

My uncle and I had an ongoing bet —  I cheered for Toronto and he rooted for everyone else. Though I suspect, being as I was just a kid,  it was to let me have my team.  And  back then those Leafs weren't just a passion for me, but also a force to be reckoned with. My stash of quarters grew steadily until the Stanley Cup playoffs when financially I generally did quite well with the upped silver dollar stake.

Then expansion came, the Leafs floundered winning their last Cup in 1967,  and at the age of 13  my interests were broadening. Sure, later watching boyfriends play and eventually my own sons took me back to the game, but I never quite felt the same about the NHL.

However, I am a proud Canuck. Seeing a Canadian team on ice at world events still gets me fired up and a favourite movie is Mystery Alaska which is all about hockey at its most basic. Guess, there's no fighting what's in the blood.

So here's a photo salute to, and some commentary about, our game from the land of the glorious and free:

Red Light Hockey's the Most Photogenic of Sports