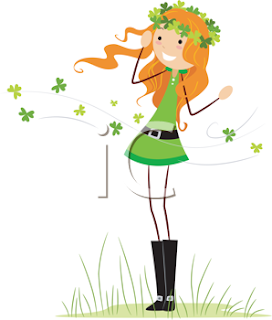 There once was a lady like me,
Who yearned for a land o'er the sea.
To a place that was green,
Such beauty to be seen
T'was in Ireland she longed to be.

Amid the German blood that courses through my veins is a little drop of Irish and it is that I sometimes think which is the strongest.  Ireland and my family are the only two things that could ever entice me to get on an airplane. I'd love to see that country. I can almost see myself trekking over the lush green hills or wandering through quaint villages and medieval castles.

I also love to listen to their lyrical dialect,  read stories by their authors and watch the films of their movie makers.  I am in truth enamoured by all things Irish.

And all of this knowing it's not perfect. Its history has been colourful and often tragic. People speak of the dreary weather, but also of the Emerald Isle's beauty and the spirit of its inhabitants.  Spiritual leader Marianne Williamson once said, "We may have bad weather in Ireland, but the sun shines in the hearts of the people and that keeps us warm."

That warmth and sunshine is no more evident than in the annual Irish celebration of Saint Patrick's Day,  which is now less than a month away, and which has been adopted by people of many nationalities in many countries.  So to honour this time of leprechauns, shamrocks and pots of gold,  a time,  according to Adrienne Cook, that begins "transforming winter's dreams into summer's magic",  we offer these enchanting image collections.