Grab Your Green for These Saint Patrick's Day Colouring Pages 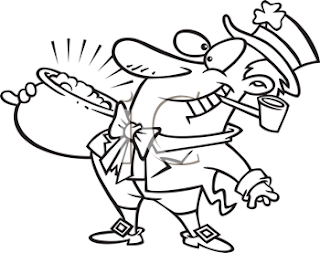 Go Green! This can be rooting for the team, or thinking ecologically.  Or, in just 10 days, it can mean doffing your Kelly green duds and making like the Irish in recognition of Saint Patrick's Day.

I remember as a little one in school the teachers hyping March 17 as if their students' names were Flynn, O'Brien and Hallahan.  My classmates and I were encouraged to wear green. In music class we sang Cockles and Mussels,  Too Ra Loo Ra Loo Ra and When Irish Eyes are Smiling. And, of course, art class was all about colouring leprechauns, pots of gold, rainbows and shamrocks.

What I don't recall was anyone telling us what the celebration was all about. A public holiday in Ireland, Newfoundland and Labrador, as well as Montserrat, the day is named for one of Ireland's patron saints. It was made an official feast in the early 17th Century.

As a religious holiday it's observed by the Catholic Church, the Anglican Communion, the Eastern Orthodox and Lutheran Churches. For Christians it commemorates the arrival of Christianity in Ireland.  Today,  Christians do attend church and the Lenten restrictions on eating and drinking alcohol are lifted for the day.

While it's not a legal holiday for most countries, the cultural spirit of Saint Patrick's Day is celebrated in places throughout the world.  Parades and festivals are held, with traditional costumes, shamrock hats and Celtic music.

And as the days lead up to this joyful Irish party, children in schools prepare to celebrate, learning songs and doing crafts.

So, if you're looking for some entertainment for your little ones, whether in the classroom or at home, have them grab their green crayon and get to work on these Saint Patrick's Day colouring illustrations.  With a membership to the first site, they can even colour the images online.