Showing the Glory and Angst of the Sports Fan 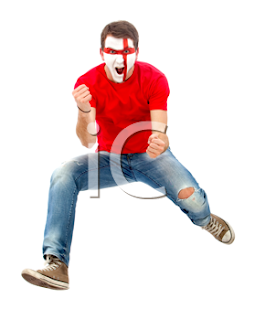 It's been a heady time for local sports fans in this area. With winter being the season for this country's favourite sport,  arenas have been stacked with people excited to watch their favourite teams, whether the players be professional, farm or family, skate to victory.

As noted, the hockey squads where I live have been doing quite well, with the Midget level having recently captured a provincial title.  The championship was capped by a late- night, rather rambunctious tour around town via fire truck, with excited players hooting and proud parents following horns honking.  Actually the parents and die-hard fans in the community may have been even be more excited than the kids.

Getting hyped up over sports is almost as much a part of any game as the game itself.  A team's success is a source of community pride.  Parents' enthusiasm often reaches immense proportion with their daydreams of having given birth to the next Gretzky looming large. The devotion of college students to their teams will generally continue long past the glory days. And love for a professional team is often fervid.  Or perhaps I should say fan-atical.

So for all the people who just can't get enough of their team and their sport, here's a fun group of photos to celebrate the glory and angst in the face of the fan.