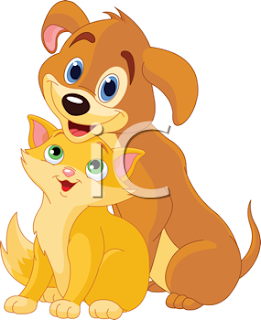 Dogs or cats? This question was posed recently on a television sitcom I was watching as an important factor to consider when looking for a potential mate.

Intense animal lovers don't have a preference, but for the majority of pet owners, it's usually an either/or situation, even within families.  My husband and I, as well as our sons, think pooches are perfect, while our girls are crazy for cats.

Our youngest actually has two dogs, one a rather handsome fellow with more patience, acceptance and brains than most people.  One of my favourite Ronin stories happened shortly after the arrival of the new pup, a needy bundle of energy and size. Where once we used to give Ronin attention when we visited,  now his little buddy made sure to dance his way between and thwart any attempt at affection.  One day,  when Milo was particularly frantic,  Ronin went to the back door and quietly sat waiting. As I opened it to let him out, the newcomer, afraid to miss something, made a beeline outside. At which point, Ronin turned and went back towards the living room, pausing to look at me. I shut the rowdy youngster outside and enjoyed a cuddle with my wise friend.

The point is they have very different personalities, and we love them both.

Cats, of course,  have personalities too. The two we owned when our daughters were home were as different as night and day. My older son 's cat (his wife's idea) is a prima donna. My daughter's cat is a handsome, though cowardly fellow, who struts his stuff quite proudly until a neighbourhood kitten comes around to scare the heck out of him.  And our younger daughter's got one feisty feline — who may just be mildly psychotic in my opinion.

Regardless of what appeals to you in a pet, there's little doubt that both cats and dogs give us more than we give them.  Put them together, such as those in these collections of clipart images and photographs, and they're absolutely adorable too.

We Rule the Internet Dogs and Cats Sleeping Together