What Creature Are We Celebrating This Month? 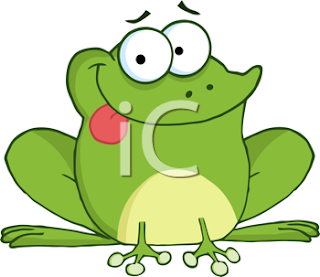 So,  it's apparently Frog Month. Now,  you might perhaps sense a lack of enthusiasm in that sentence and you would be more than correct. To be perfectly honest it was all I could do to type it.

The thing is, I am phobic about frogs. Well, amphibians of all varieties actually.  At the mere sight of a warted toad or its disgusting, swamp-loving cousin,  my throat closes, my heart accelerates and I am filled with abject terror. Even the deep-throated mating gargle of a slimy bullfrog can send me silly.

When did this irrational fear begin, you might ask. I know it wasn't there as a child, when my friends and I gleefully captured the toads that fell into the window wells around our house.  It certainly wasn't there in my early teens when I used to traverse through a stream, stepping on rocks, or frogs, whichever was closest,  to hang out with a group of friends at a tiny island park.  But at some point along the way, I suspect in the very late '60s or early '70s (ask no questions, I tell no lies),  these creatures became the stuff of my nightmares.

However, while it would make me quite happy to see them eradicated from the world,  I do recognize their value to the ecosystem and have also noticed that for some very strange reason there are many people out there who seem to find these wretched things — well, cute.  Can't think of a thing that's odder.

But, as this blog has promised to scope out "everything related to the fascinating world of images" and offer glimpses of "some of the best clipart" to be found online,  and because April is the month to celebrate the homely, but useful, frog I decided to face my fear and offer up these collections,  for those who would disagree with me.