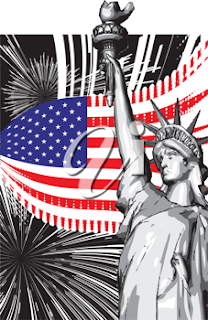 On May 14, 1897,  Philadelphia, PA was the site of the first public performance of American composer John Philip Sousa's The Stars and Stripes Forever.  Known primarily for his patriotic and military songs,  "The March King's"  homage to the American flag was composed on Christmas Day 1896 on an ocean liner bound from England after a holiday.

According to the USA Flag site, the song's subject has been a symbol of the nation's strength and unity for more than 200 years. Representing the country's original 13 colonies are the red horizontal stripes, while the white stars on blue are symbolic of the 50 states of the Union.  There is symbolism behind the colours as well: red for valour, white for purity and innocence and blue for vigilance, perseverance and justice.

With the day to celebrate "Old Glory"  (a nickname for the flag coined by 19th century sea captain William Driver) approaching,  it seemed appropriate to highlight these collections of illustrations for your Stars and Stripes Forever Day projects: