In Recognition of The Fallen 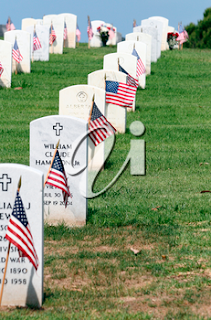 May 27 is Memorial Day in the United States. Unlike Veterans' Day which honours military veterans, both living and dead, Memorial Day is a time to remember the brave people who died serving their county as members of the American Armed Forces.

Formerly known as Decoration Day, this federal holiday held annually on the final Monday of May,  originated after the Civil War.  In rural areas of southern America there are still Decoration Days held at some cemeteries in late spring or early summer.

But across the country this coming Monday,  people will visit memorials to fallen soldiers, and volunteers will place flags on each soldier's grave in national cemeteries.

Tradition has the United States flag being swiftly raised to the top of the staff then lowered to half mast until noon. This is a tribute to the more than one million men and woman who have given their lives for liberty.  At 12 p.m. the flag is raised again as an uplifting symbol of the continued fight for freedom.

Other traditions surrounding Memorial Day include parades, as well as the Indianapolis 500, held on the Sunday before.  Considered the start of the summer season, there are also many barbecues, cookouts and picnics held in conjunction with this significant event.  These collections of images pay tribute not just to the patriotic pride best associated with it, but to the social traditions too: