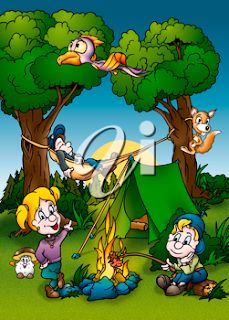 Many, many years ago, while visiting my parents at their summer trailer with a friend, I did something on impulse which at first had my husband thinking I'd lost my mind. In retrospect we know it was one of the best silly things I've ever done.

Okay, so there may have been some drinks involved, but my judgement was far from impaired. It was a gorgeous summer day in lake country and when my parents mentioned they had decided to up-size their trailer,  the only logical next step seemed to be for me to take the old one off their hands.  It helped too to learn that a site just down the road and beside my brother's trailer was available for us to move in.

What followed were years of amazing summers with our kids. Our trailer was tiny and simple, with no hot water and barely enough space to sleep the six of us. But it was perfect.

Our brood ran barefoot with their friends, and as there was such a communal feel to the campground,  relatively unsupervised. Lazy mornings were followed by afternoons at the beach and evening walks for ice-cream.  It was an idyllic time in our lives.

All good things do come to an end, of course. When I finally returned to work full-time it  dawned on me that rather than being restful, weekends in our simple trailer meant I did all of the things I wasn't getting done at home. And it was more difficult.

So we sold.  Now camping means spending a couple of hours at my daughter and son-in-law's tent before returning to my well-appointed rental cottage.  But, I've never forgotten those magical summers.

So here's to the fun of weekends away in tent or trailer reflected in these great clipart collections: