Who Ever Said Having a Happy Marriage Would Be Easy? 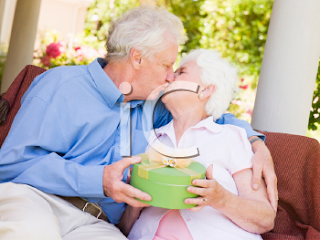 I rather feel like celebrating today. Not because it's Friday, but because it's my wedding anniversary.  With that in mind you can guess what the focus of today's collections of images and photos will be.

Giving the high odds for not succeeding at marriage today,  enjoying wedded bliss no matter how many years is a great thing. Seeing folks who have been in for the long haul should, I think, give hope to all of those lovestruck newlyweds.

The thing with marriage today is that commitment can literally mean a lifetime. Where years ago, "until death do us part" probably wasn't going to be that long, in the 21st century it's not uncommon for couples to celebrate not just 50, but 60 years together.  My parents' 70th anniversary is this December. They also recently told me about another couple in the long-term care facility in which they reside who has been married for 75 years.  Amazing.

Having spoken to many milestone anniversary celebrants in my years with a local newspaper,  it was a common question to ask them their secret.  The answers from these 'lifers' were always the same.  Forgiveness, a sense of humour, loyalty and not giving up when the going was tough.

Sage advice. No one ever suggested sustaining a happy marriage would be easy.  But if you can forgive the faults, laugh at the mistakes, remain loyal and fight through the bad stuff,  it will sure help.