Collections for the Rock Star in You 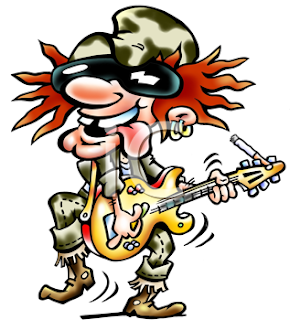 When our youngest child was 13, he mentioned to us that he'd like a guitar. Having seen how he'd approached piano lessons, and knowing the attention span of a young teenage boy all too well, my husband and I made a deal with him. If he came up with half of the cash for an electric guitar, we'd throw in the rest.

Well, he took up the gauntlet and as a result eventually his own guitar, the first in a series of many. It was, as it turned out, money well spent. Not a day has gone by in the many years since that he hasn't had his guitar in hand, and has, after studying it at the post-secondary level,  enjoyed some professional, though modest success.

Yesterday, the son of a friend of mine turned 16. His gift was his first electric guitar. Nothing more genuinely conveyed delight than that smile on his face. After all, guys do love their guitars. And, as I joked to my friend, girls do love the guys who play them.

I tend to think there's a bit of a rock star lurking in all of us. For that reason we should all enjoy these clipart collections of guitarists, axemen,  strummers and pickers.