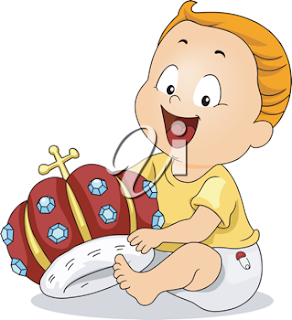 The world is agog this week with the arrival on Monday of a baby boy.

July 22, at St. Mary's Hospital in London,  Prince George Alexander Louis, son of England's Prince William and his wife Katherine, the Duchess of Cambridge, made his arrival. The wee royal is third in line to the British throne.

Since the couple announced the baby's name on Wednesday, there was plenty of speculation and chatter on what the newest addition to the royal family might be called.  There have been six previous King Georges in England, most recently the new prince's, great-great-grandfather, King George VI.

Now, I couldn't by any stretch of the imagination be called a monarchist. I don't generally even have a passing interest in the British royals.  I do however, have to admit to being quite impressed by Kate Middleton and how she has lived the life as the Duchess of Cambridge to this point.  There are just some things you notice.

And let's face it.  A new baby is certainly worth noticing. The exciting news of Prince George's arrival is that,  whether you care or not.

So in celebration of this new baby, and all the little princes out there, here are some adorable baby boy illustrations: