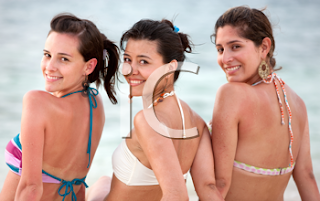 Like many people these days, I'm a big fan of the television series, Mad Men. For those who've lived in a cave the past six years, this is a show about Madison Avenue advertising executives in the 1960s.

Besides being well written with a stellar cast, for me, it's also a cool trip back in time, with loads and loads of nostalgia, familiar cultural references and styles.

Amidst the chain smoking and heavy drinking,  the men and women of Stirling Cooper (with the later additions of Draper Pryce) doggedly pursue companies with advertising campaigns for everything from Clearasil to Mountain Dew. Some they win, some they lose, some they toss away.  One of the latter was a company that made two-piece bathing suits. They were fighting against  'emerging' competition from the bikini. The firm sent them packing as a lost cause when they rejected the demo ad as being too provocative for their family-oriented business.

The ad in question, showed a young woman in a modest bathing suit bottom, with the slogan covering her breasts.  While it suggested she was topless under the band of text, in this day and age it would certainly be a long way from provocative. Barely there bikinis are today's fashion trend for the beach, it's more conservative two-piece cousin pretty much a distant memory.  And even provocative today seldom offends.

Of course, there are people who prefer a little more coverage. Like the folks who wear them, swimsuits come in a variety of shapes and styles all designed to keep cool and play cool in the summer. From the slightly risqué to the demure, you can find them here in these photo collections;