The World of 3D 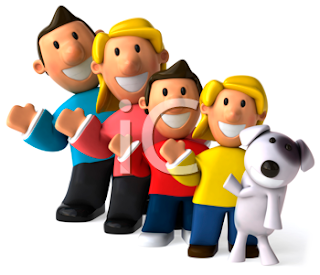 Several years ago while my husband and I were shopping for a new television, the clerk tried to convince us we should give the latest technology a try.  So after making a spectacle of ourselves with some snazzy glasses, we settled in front of a 3D TV to see what we thought.

Turned out it wasn't so much what I thought as what I felt. Within seconds I started to feel woozy, followed soon after by nausea.  3D was out, LED in.

So, two years ago, it was with no small amount of  apprehension that I let my grandson convince me we needed to go see that particular version of The Avengers. Having been duly warned by others who had not fared well with the 3D format on the big screen, I agreed to accompany him with the caveat that we would be sitting near the back of the theatre.

Which it would seem was the ticket.  I had a blast. With larger-than-life characters coming at me, and planes seemingly flying over my head,  I was pulled into the world of 3D.  It truly is, as noted on iCLIPART.com's Pinterest page, the link for which I share below, the place where life pops out to say hello.

I guess you might say, then, that with these favourite collections of 3D illustrations, I'm sending a friendly greeting your way for the weekend: