In Celebration of Labourers and Labour Day 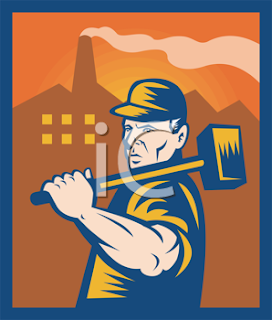 In the United States and Canada, we're coming up to Labour Day. This long weekend, rooted in the labour union movement, celebrates workers and the jobs they do. It also unofficially marks the end of summer as many children and teachers will be heading back to class the following day.

The origins of Labour day in Canada, trace back to December 1872 and are strongly tied to the labour union movement. According to UFCW Canada's website nearly 30% of Canadian workers belong to unions. While this includes people of many professions, including, nurses, musicians and journalists, for this particular holiday none comes to mind more for me than those in skilled trades and factories.

Probably because my husband, a sheet-metal worker, is among them.

Now, I'm not going to get too political here and debate the pros and cons of unions, though just for the record I'd say plenty of the former, not so much of the latter.  But I will say what history and experience have shown me — we can all, union member or not, thank the unions for the rise of the middle class, for decent pay and a reasonable work week.  And granted the unions aren't perfect, but having lived the life, I'm proud to say my husband belongs to one and recognize what the fight achieved for us.

As for those people eager to see the dismantling of the unions, I shake my head in perplexity.  I suggest they take a look at the world the way it was before unions,  at our current crop of dishonourable politicians and cut-throat corporate honchos and think again.  No matter what side you're on you have to know by now it's never a good thing to let the pendulum swing too far the other way.

So this weekend, while I'm stretching out on the deck, relaxing with a drink and a book, enjoying the fact that I've got an extra day to spend at home and with family, I will also take a minute to think of how good I have it and why.

And to celebrate the labourers for Labour Day, I give you these collections of illustrations:
iCLIPART.com Illustrations of Labourers