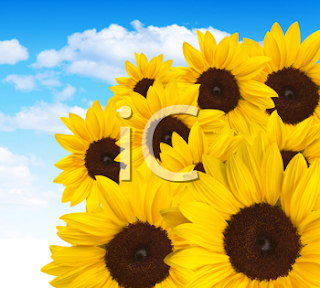 It's always seemed a bit of an anomaly to me.  A rural area, densely populated, the peppering of tiny settlements lining a seriously-busy,  four-lane highway.  The desire to race through is tempered by the plethora of police cruising along the road, or parking alongside it. Despite the similarity to the 400-series roads, this one has long been known as a speed trap.

My husband and I take this route frequently as it leads to our daughter's home.  The frustrating ebb and flow of drivers desperately eager to speed along, but cognizant of the ever-present officers,  can make what's essentially a short drive seem tediously long.  Any beauty in the countryside is lost in the congestion of traffic and houses.

Yet, recently, there was a bit of a surprise.  Approaching one rare open space we noticed a huge line of cars parked at the side of the road. Drivers and passengers were exiting their vehicles and working their way up the road. The reason? To photograph a field of sunflowers.

Such a profusion of these stately blooms definitely did create a photo op. The spectacle of bright yellow heads raised en masse to the sun against a backdrop of azure sky and verdant leaves was a picture waiting to happen.  But more importantly,  their cheerful appeal drew people away from the crazy toward the calm of nature. It was a great reminder that despite all the cars and buildings, I was definitely still out in the country.

Take time to smell the roses? Sure. Or better yet stop and enjoy the striking display created by the majestic sunflower as seen in these photos: