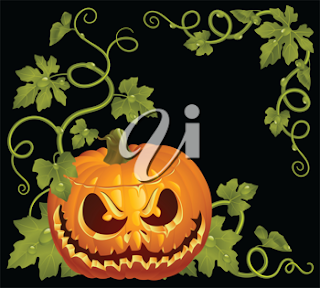 A Halloween ritual, which despite a bit of a disinterest in the holiday my husband has always managed to get done, kind of got lost in all of the other busyness of life this year. While there are two lovely pumpkins that are part of an autumn collage on my front porch, not one of them is sporting a ghoulish sneer.

We are without a jack-o-lantern for the first time in forever.

Too bad. Hubby always did a fairly decent job of it. Or at least that's what I thought until catching a glimpse of some other folks' works of art. Rather than the familiar sneering visage, people are carving everything from skeletons to arching cats into their pumpkins. Pretty cool, really.

Though I have to say I would have been happy with the old familiar face. So, as I don't have my own to express my Happy Halloween wishes, here instead are some wonderful jack-o-lantern illustrations.