The Wonderful World of Witches 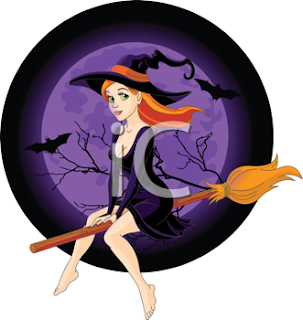 It wouldn't be Halloween without a witch or two. So today's clipart collections, which you can find at the end of this post, will feature illustrations of these charismatic sorcerers.  You will see that they come in a variety of shapes, sizes and moods. Some are stereotypical, but some are sweet, some comical some even sort of sexy.

From the time I donned a black pointed hat and flowing gown for the first Halloween I remember, I've had a bit of a fascination with the notion of wicca and its practitoners.  The idea of conjuring spells and mixing brews for multi-purposes is kind of cool. Provided, of course, that the intended purpose is nothing but altruistic.

A granddaughter introduced me to the '90s television series Charmed where three good witches, united in sisterhood, fought evil.  No broomsticks, no warts on noses, no sinister cackles from this trio. Just powerful, beautiful women using their unique talents and gifts to make the world better. Now that's a fascinating concept, don't you think.