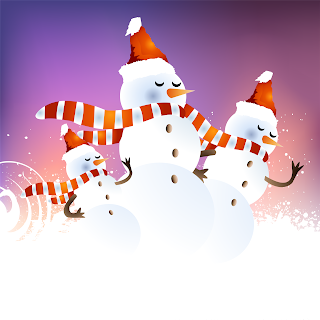 After a 13-year hiatus, a new grandbaby arrived to join our family last year. Excited as we were for her first Christmas in 2012, she, at five months, was less than interested.

This year, however, things will be different. While she might not understand why it's all happening, the lights, the presents, all the fuss are things she's noticing and in which she's taking much delight.

For her grandfather and me the fun of once again seeing Christmas through the eyes of a child is enlivening.  Though we've always put a lot into the festive season at our house, this year there's no question we're throwing in a few bonus features as well.

For example, following a major ice storm in the area this past weekend, Papa and I, typically more inclined to spend a cold day tucked in with a good book, instead broke through the solid crust of snow and built a snowman to welcome our Little Missy on Christmas Day. Hopefully she finds him as adorable as the ones featured in these collections of illustrations: