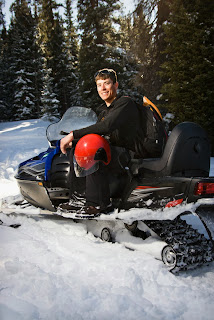 It was October 1976 when I met my husband. Just a little over a month into autumn and already there was snow on the ground — a situation that sadly remained until spring.

Perhaps sadly wasn't quite the right thing to say. Back in those days, I somewhat looked forward to the snow and cold as my new guy was an avid snowmobiler and weekends meant lots of time on the trails with friends.

The sport was different then. Breakdowns happened frequently, extra fan belts were carried on the steering column as we were more shocked if one didn't break than if it did. Trails were usually blazed by the machines, rather than the fancy groomers of today, so riding was often rough and occasionally harrowing.

It was  a time when with a reckless lack of responsibility little thought was given to the consequences of drinking and operating motorized vehicles, so our outings were often like house parties in the snow. Large groups would travel out, stopping often for a break, before reaching some rustic pub for a quick warming and hot food.

They were fun times.  But as our family grew I spent less winter hours on the trails and more rocking babies.  As trail systems improved, my husband took great pleasure in swift and steady rides, logging kilometre after kilometre, rather than enjoying the halting progress we used to make.

It all came together to diminish my interest and it's probably been a decade since I've gone for a tour on those highways in the snow. I do somewhat miss the beauty of riding on a cool crisp winter day through quiet rural bushes and across spacious fields. But rather than face the cold these days,  I'll take my trip vicariously with these wonderful photos instead.