Photos of People and Pets 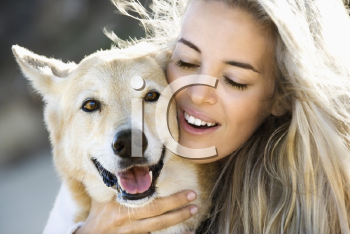 I believe it was Mark Twain who said, "The more I know about people, the better I like my dog."  Most dog lovers would agree. Our canine friends, in general, are among the most loving and loyal of pets. They have an instinct for knowing when you need them and can be affectionate beyond measure. They are faithful, devoted, intelligent and often a great source of entertainment.

My husband and I both grew up with a dog as a pet. Thus, when we began our life together it only made sense that we welcome another pooch to the family. When Buffy passed away at the good age of 14 while walking down the road to get a pork chop from our neighbour,  there was a brief hiatus before we realized that our house wasn't a home without a dog. Enter Ani, my wonderful Siberian husky cross, a feisty bundle of nervous energy who adored me as much as I did her.

For over a decade we benefited from her company and friendship without a blip as she enjoyed robust health. Then just before her 12th birthday she was diagnosed as being in the last stages of a terminal cancer. A credit to the disposition of animals is how they suffer in silence and Ani was no exception. She had obviously been not well for a long time without giving us any  indication.

It has been three years since we said goodbye, one of the hardest things I've had to do. So much so, that while my firm belief still is that a house is not a home without a pet, my heart, as yet, won't let me get another. At this point, it's not having a dog I miss; it's not having Ani that's the problem.

What's nice is that rarely do I make these remarks to a person and get rolling eyes or deriding snorts. Most people at some point in life have had a pet and understand the bond that humans form with their animals is important to them. While even I might think that some people take it too far, pampered pups more children than canines, for example,  I would never suggest that the hurt their loss causes isn't justified. A true pet is never "just a pet."

So, to all the people who understand what it means to share their home with a four-legged friend, here are some great photos of like-minded folks: