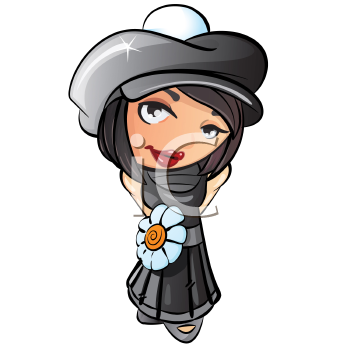 When it comes to drawing characters,  I really haven't improved much since my kindergarten days. My attempts at moving beyond stick figures are  unimaginative at best, downright childish at worst.

The unimaginative came about as a result of copying the work of a friend of mine years ago. A budding fashion designer, she had become rather adept at drawing young girls in fab '60s attire. Taking her style I was able to produce reasonable facsimiles, though my range was most assuredly limited. A couple of different hairstyles, or a change from bellbottoms to a mini-skirt and go-go boots were the only alterations.

The fact that I could copy them I see in retrospect proves that she was not exactly a major talent either, though.  But at that time, to a young teen with limited exposure to people with artistic ability, this was pretty cool.  All I saw was a blank piece of paper transformed by a fairly accurate depiction of a person.  That there was a rather cartoon-ish flare to the work was irrelevant.

Nowadays, few people probably use pencil and paper to create cartoon illustrations. Photoshop has resulted in a new breed of artist and artistry. The easel is a computer, the palette software, the art digital.

How it's done can be practised with help from these great tutorials.