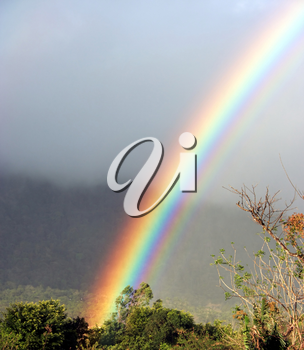 No one would argue that Mother Nature loves to put on a show. From the bursts of colour in the spring to the sparkling monochromatic landscape of winter; from a fierce display of lightning to the brilliance of the setting sun, she gives us spectacle after spectacle.

One of the most impressive, however, is also high in symbolism. The rainbow is not just one of creation's most glorious phenomenon, but recognized as a sign of hope, faith and inspiration.

Is there anyone who hasn't been awed by that radiant arc? Or by seeing the cascade of a  waterfall through soft translucent bands of colour, sunlight playing off the mist. Its sudden appearance at the end of a rain is breathtaking, the perfect cue that it's time to stop and reflect. Even if you're too busy to pause  for a second, there's no question you will take notice.

Driving through a nasty rainstorm on our return home from a holiday last year, my husband and I were surprised by the sight of not one, but two, rainbows, lying before us like two brilliant portals through which we were to pass. Certainly, this was one of the most spectacular I've ever seen.

No, there's little doubt that a rainbow is one of Mother Nature's most impressive performers. Here then is a photographic lineup of some of the stars.