Wonderful Photos of Fathers and Sons 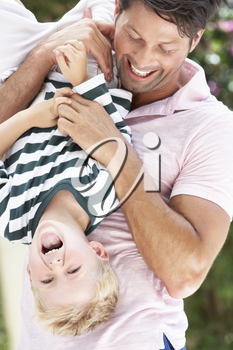 From a feminine perspective, if there's an interesting relationship it is that of father and son. While Daddy might be wrapped around his little girl's finger,  the ties that bind father and son are straightforward. The older is a role model, leader, teacher and friend.

Whether it was being with my brother and father or my husband and son, I have seen a unique dynamic where son strives to please and dad wants only the best for, and expects the best from, his younger counterpart.  In the many other examples I've seen over my lifetime too, through friends and acquaintances, this particular family tie is bound like the loose ends of a basting stitch, capable of sliding back and forth from respect, love and pride, to frustration, confusion and misunderstanding.

There is undoubtedly a deep connection of affection, but perhaps because of the whole tough-guy thing, it seems to be more covert than it is with a daughter. While spontaneous hugs, cuddles and kisses are part of dad's time with his Sugar and Spice, the same reactions takes on a rougher edge when delivered to a son, displayed by a quick knuckle rub on the head, playful roughhousing, or an arm thrown around the shoulders.

It is the hero worship of son for father that affects me most. Decades ago on the Donna Reed Show, actor Paul Petersen paid tribute to his TV father in a song that said what I know many young men feel:

"When I was small, I felt 10 feet tall, when I walked by his side.
And everyone would say that's his son, and my heart would burst with pride."

I saw that sentiment reflected in the eyes of my own boys as they chased around after my husband, emulating him, unconsciously and consciously, from his walk to his sense of fun. For him he wanted only that they be better men than he believed himself to be..  and so the dynamic began.

In honour of all fathers, as their special day nears, here are some wonderful photos of men and their boys:

Famous Father and Their Famous Sons