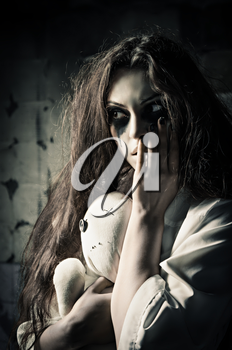 A week from today is Halloween. That day, and in the days leading up to it, it's time for all things creepy, when people  innocently entertain the macabre, in  thought and deed.

Typically protective parents take their kids to haunted events, where organizers have designed tableaux meant to terrify. These are the places where monsters lurk, all in the name of fun.

After all, who doesn't like to be scared? The horror genre is becoming increasingly popular in movies and television, many shows based on characters first introduced in literature, such as the enigmatic Dracula and his later counterpart Edward from Twilight. The youth culture in particular today seems to find a great deal of attraction in heroes with fangs. Dark gloomy gothic fashion has also been adopted by many angst-ridden teens.

Though I'm more likely to pick a tear-jerker over a spine-tingler when choosing a movie, I am a big fan of the horror genre in literatrue. Perhaps it's because the terror is less in your face, but don't suggest for a moment that a scary story can't have the same kind of power. I recall sitting on the couch for half an hour one night after reading a Dean Koontz classic, before being able to put my foot on the floor and make my way upstairs to bed. Funny in retrospect, but real fear at the time.

Who knows what attracts us to things that leave us quaking. I suspect it's adrenaline, and our fight or flight response. But, whatever the reason, it's obvious seeing the many people who get into the Halloween spirit wholeheartedly that there's something there.  Dressing up in ghoulish attire,  setting the stage in home decorating or scary haunted house events, there's no doubt that may feel the grisly and unexpected can be lots of fun.

Here then are some spooky photographs to get you in the mood for the bigger thrills on the way next Friday: