How to Photograph Your Christmas Tree 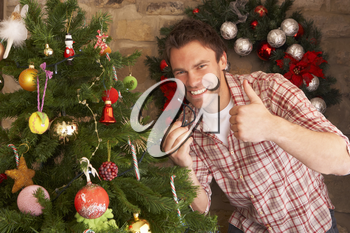 Decorating my home for Christmas involves a little bit of something in virtually every main floor room as well as a few touches upstairs.  But while replacing the everyday with snowmen and santas, garlands and twinkling lights can take time, the most demanding job is decking out the tree.

Once the children left home the responsibility of this fell squarely on my shoulders for several years. And for several years I moaned over the pesky lights. Strings that lit when tested then failed to light after painstakingly weaving them through the branches and plugging them in.

Of course this  always only happened after several strings had been added to the tree. Each time it did happen  I threatened to dump the tree  in favour of a pre-lit gem. Each time I threatened, my husband talked me out of it.

Until he helped me this year and began to sing my song. After a succession of strands with half of the bulbs out and even one that mysteriously decided to flash, shopping for a new tree that would have that chore done  became the stuff of serious discussion. The project  after all,  had taken two of us six valuable hours to finish, thanks to those lights.

Needless to say, when the work was finally done getting a picture of the stately display this year took on a whole new meaning. Rather than a memory of our 2014  tree, it was more about proof that we can achieve in the face of adversity.

Getting photos of the annual Christmas tree, for whatever the reason, is a popular practice in most homes. It's soft glow is a charming image on its own, and the perfect backdrop for family photos.

To capture it perfectly, though, can be tricky. Here are some helpful tips to get it right:

Picture Correct How to Take Photos of Your Christmas Tree

GlobalPost Take Pictures of Kids in Front of the Christmas Tree

NYI of Photography How to Take Photos of Holiday Lights