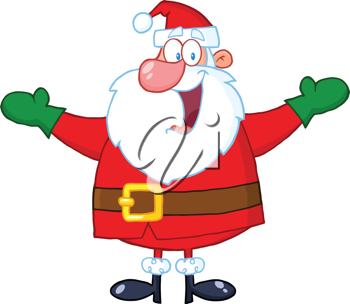 The guy featured in today's  illustrations can be a bit of an acquired taste. Portly and hirsute with a booming laugh, no one could deny he's an imposing character.  While adults easily see the charm and colour of his personality, little ones can often be intimidated.

I was with our grandchildren for their visit with Santa this year. It's a tradition that anyone with experience can tell you often doesn't go well. As the jolly elf made his way to his chair, our  wide-eyed toddler managed a "Hello, Santa", which was quickly followed by "No.  No. No. No. No." when the suggestion was made that she sit on his knee.

For little ones it does take some time to see past that larger-than-life persona.  Until they come to understand the magic in loving him.

Adults, who have come to accept what his presence represents, that of love and generosity, can be equally enamoured.  Personally, I've always had a crush on the guy, besotted I admit with his charmingly-appealing appearance and spirit. The fancy red duds, glistening white beard and round belly on any other guy might not be quite as endearing, but that twinkle in his eye and slight sprinkle of mischief in his demeanour make him irresistible.

And while you might suggest that it's the gifts that win us over when we're little, that's no explanation for people like me.  I can honestly say that my infatuation has only gotten greater since my name no longer makes his nice, or naughty, list.  Santa Claus might not be the 'reason for the season', but for me he is the personification of a lot of what's good about it, from his generosity to that jolly "HO, HO, HO!"

So, love him, like him, or simply need his likeness for a project I'm certain you'll enjoy these wonderful Santa Claus images: