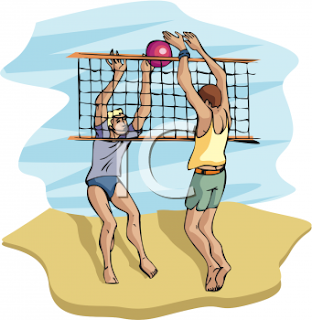 When it comes to summer sports, I have to say it's been a while since I've played anything besides a rousing game of croquet.  The enthusiasm I had when younger for a round of badminton or a few innings of baseball has most definitely waned.

Generally now, when the heat of summer comes along,  I'm far more content to sit cooling with a nice drink under a shady maple, then I am working up  a sweat tossing, hitting or bouncing a ball.

Fortunately, the younger generation in our family isn't following my example. My granddaughter, who was named MVP of her college volleyball team, loves being active.

She also loves that game and in addition to playing on a court has done rather well with it on the beach too.  While she has my complete admiration for both, it is her prowess at the latter that has really wowed me. The challenges of a regular game of volleyball, as far as I'm concerned, are enough. No need to add in the blistering sun and extra intensity of moving through sand, to make it tougher.

The reality is that those hard bods making a competitive game of  beach volleyball look easy are true athletes.  Playing in the sand is far more difficult than moving on  a stable surface, such as grass or concrete. It's also a sport that uses every part of the body, while you run, jump and dive through the game.


In these collections of images you can find the summertime fun side of the game as well as the competitive edge: