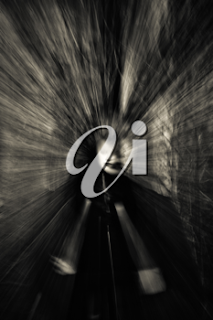 A strange thing happened when I was taking pictures this past Thanksgiving. Eerie really.

It began with my 94-year-old mother's turn to tell us what she was grateful for. Having lost my father last year, shortly after their 70th anniversary,  her response was not unexpected. "I am so thankful to have had the most wonderful husband. I miss him and wish he was here."

After the rest of us had finished listing our blessings, I decided the time had come to take a picture. Amidst the grumblings of hungry diners I took a quick shot, then checked to see if it was good enough to let people get back to the business of eating. What I saw, however, set us back a little. At the end of the table, closest to my mother, was a tall shadow.

While the logical side of the brain searched for a technical answer as to what had caused the anomaly, the imagination was happy that there didn't appear to be one. Instead, it could join with my heart in what I wanted to think I was seeing.

Though it wasn't the case this time, (and my mind still searches for what did happen) a similar result was something that can be achieved with double exposure photography. And it has done in my fake ghost photos. The spooky apparition, the shadowy figure seen behind another person can turn an ordinary picture into something mysterious.

As we approach Halloween,  you might want to have a little fun with double exposure photography. If you haven't tried here are a few tutorials:

How to Create Spooky in Camera Double Expostures