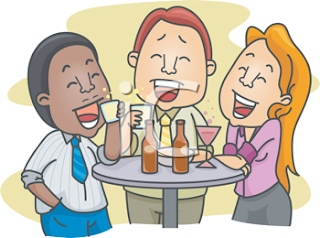 Today, as it has become known in social media, is Thirsty Thursday. Its popularity is typically with college and business students who,  either having no classes or a light schedule on Friday, want to get a jump on an intoxicating weekend of partying.

And then there are people like me. They'll take the excuse provided by the idea of a Thirsty Thursday to sit down after a long day at the office and have a couple glasses of wine before dinner instead of finding more work at home.  It's not exactly taking it to the extreme that the name would indicate, but simply a reason to divert from the merciless end of responsibilities and chores that find us in the real world.

Let me say first, promoting the consumption of alcohol is not the point here. At least not to the extreme.  I'm an advocate of moderation and common sense.

However, if a little tipple is what's necessary to get us to slow down once in a while, why not.  If it means spending time out with friends instead of sitting in front of the television alone it can't be all bad.

I come from a family where a cocktail was offered to each and every guest who stopped by, invited or not. For my parents it was about being gracious hosts. It was viewed as a welcome and no one was encouraged with a bottomless supply of gin to overstay it.   That to me, was the way life was lived.

So  tonight, I look forward to my well broken-in corner of the couch, where I will settle,  pinot grigio in hand to catch up on the week with my guy.  And in honour of everyone who will be raising a glass or bottle this Thirsty Thursday, here are some drinks of the clipart variety, perfect for promotions and fun projects: