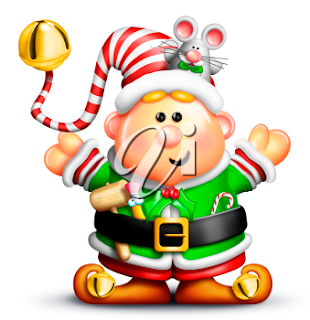 He looks at his Papa with a smile to melt the coldest heart. Though barely two, he is the quintessential little boy — fascinated by machines,  hammering on things and being on the go.

He's also got a sensitive side, though. He loves to snuggle with a cuddly baby doll or nestle quietly against you while you read him a story.

He is our 'Sir Lash-a-lot', a tow-headed sweetheart with eyelashes like palm fronds.  The third grandchild for us, this delightful toddler looks at us with a sparkle in his baby blues and more times than not graces the world with an award-winning smile.

That I made the decision last Christmas to start an elf ornament collection for him was one of my better choices in this family tradition. These mythical creatures suit him. He is quite frankly a merry little charmer who always seems to be hiding some private joke.  When I think of elves or look at him the word that comes to mind is impish.

At this time of year, the image of an elf is as magical as the season itself.  Their world is a mythical wonderland where dreams and wishes come true. These clipart collections celebrate the fantasy and fun of Santa's little helpers: