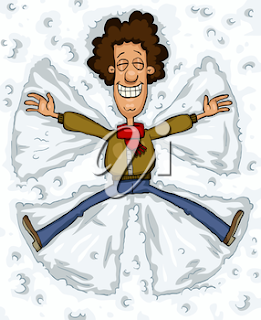 We knew we weren't going to be lucky enough to have him visit sporadically — as he has been doing. We knew that he felt a sense of entitlement to come and stay for a few months. And we knew that meant he was going to show up, with all of his baggage,  and linger, probably far longer than he should.

With only a couple of quick passes through the area before the new year, Old Man Winter has decided the time has come to hang around for a while. He blew in  Sunday and has since given us nothing but the full force of the worst of his personality.  He has huffed and puffed,  stormed and squalled. He has pelleted us with, first rain, then ice, now snow.

Certainly we were due. The unseasonable warmth and lack of the fluffy white stuff was perfection for his haters, but we knew it had to end. The sudden onslaught of a three-day spree, however, replete with whiteouts, icy roads and bone-chilling cold is a bit of a shock to the system.

We had become a bit complacent, I fear, and most certainly spoiled. Coming back to the harsh realities that accompany our unwanted guest is an adjustment,  as we don bulky outwear, shovel walks and reschedule travel plans.

But, what Old Man Winter perhaps doesn't know is that in this corner of the world we are nothing if not adaptable. We use that trait to find the pleasures in what he brings — to shovel with the promise of a hot chocolate by the fireplace afterwards; to meet his bluster head on with a snowmobile ride, to dig out our skis and glide across his boring blanket of white, brought to life by sparkling sunshine.

So, with only a few weeks of winter remaining, we will successfully tolerate the new guest, the only way we know how. By finding the best in what he throws our way.  For starters, let's poke a little fun at him with these collections of winter cartoons: