123 Illustrations of Children at Play 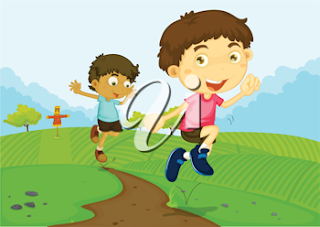 "(A child's) need to be outside is not just a thrill. It's a physical and emotional need. We've just forgotten it."

I have no idea who came up with this little adage, but I can't think of words with more truth.

My kids were raised in fresh air and sunshine. They splashed in spring puddles and danced in the rain. They spent summers building sandcastles and swimming at the beach, acquiring a new healthy glow to their skin.  They jumped into and hid beneath piles of crisp autumn leaves. They slid down winter snow,  constructed forts and lobbed snowballs.

They have grown into adults, therefore, who appreciate being outdoors and on the move. Our oldest thrives in wide, open spaces. His younger sister loves to walk and garden. The baby finds comfort in the extreme — majestic mountains and deep blue oceans.

But it is our older daughter who is perhaps most in tune with the outdoors. From childhood, she was least likely to spend time in front of a television or video game.  She was my husband's most enthusiastic snowmobile partner, was eager to help with any task that took her outside and worked as a lifeguard so she could enjoy the summers in the best possible place for her.

She is the deep woods camper who prefers a tent in the quiet silence of a northern wood to a beach front property with amenities. Campfires happen on any day, at any time of year when possible. And the best entertainment for her is a walk on the hiking trail at their rural property.

It's no surprise, therefore, that the tots in the daycare she opened rather than returning to a kindergarten classroom following the birth of her babies, are outside daily for far longer than the minimum guidelines dictate.

No surprise either, that the little ones thrive on it.  They return to the classwork calmed and alert. They devour their snacks and lunches, awake refreshed from a deep nap.  Rainy days are looked on, from both sides, with dismay and disappointment.

When I look at children today holding cellphones and all the other gadgetry out there, sitting on a couch, heads bent, oblivious to the wonderful sunshine,  I feel rather sad.

It's even worse that many have forgotten how to play. Send them outdoors without technology and they often don't know what to do with themselves.

I recall a visit with the family of a 13-year-old, who, when told to come outside, whined about there being nothing to do.  Suggestions were made — toss a ball, call a friend, go for a walk in the bush — but all were met with a shrug, a downcast expression and eventually the 'stomp off'.

Fifteen minutes later he did hook up with a few friends for a game of road hockey and finally technology was forgotten. Couldn't help thinking how much better it would be for him if that cellphone of his went missing and was no longer the go-to for entertainment.

So, since we will soon be rejoicing spring's comeback, it seemed a good time to share a few illustrations of outdoor childhood fun.