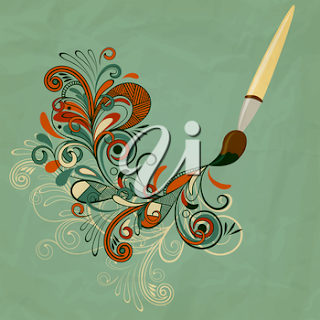 Whether it's words or a visual decoration, when it comes to just about anything more often than not, less is best.

Having worked in journalism, I learned to get the important details into a story as soon as possible since studies had shown that the majority of readers don't make it past the fifth paragraph. At best, they will scan the remainder of the story.

When first told this, I was doubtful. That is until I noticed that only a few newspaper articles held my interest throughout. I was, I realized a scanner.  And given that I'm an avid reader, it stood to reason that if I fell into this category it was unlikely  I was alone.

On the advertising side of the business, too, it's common sense that a design not be so full of visual elements and text that the eye is unsure what to take in and might possibly miss the intent.

There was often chatter to be heard from our design and production people regarding effective use of whitespace, with the sales manager for one being a strong proponent of the less-is-more school of design thought. One of his most effective ads during his tenure with us actually was comprised of about 90% negative, or empty,  space, much like the design of the Google website.

The trap I've discovered with designing is over thinking the project. Our daughter, in crafting the stationery for her wedding, came up with beautiful products, using online clipart sources, that were simple but stylish.  Once she had what she liked, there wasn't time spent trying to decide if adding something could improve upon it.

One of the trickiest projects though was the place cards for the tables. Having gone with a black-and-white theme, and given the limited space, she settled on a pretty flourish as the best, and only, necessary decorative element for the design.

These swirls, which run the gamut of simple to elaborate,  add a touch of elegance without overwhelming. They are ornamental without being garish, attractive without being showy.

While lovely swirls and flourishes are available through subscription sites such as iCLIPART.com , iPHOTOS.com and Clipart.com it's also, if you're  looking to make the design even more personal, a project to be tackled on Photoshop, Illustrator, etc.  Since it's Tutorial Tuesday, here are some tutorials and resources for free flourish brushes:

How to Draw Vector Flourishes in Photoshop

How to Make Flourishes

Create a Flourish in Photoshop Elements