Thousands of Lion and Lamb Illustrations for March 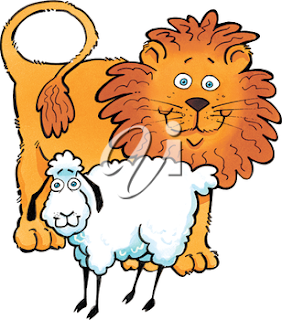 March has arrived, the time of Irish blessings, Easter and spring.

It is too, an unpredictable month, with hints of the promised warmth bookended by mid-winter blizzards, biting cold and dreary damp fog.  March in this country can mean a snow shower one day, a drink on the deck the next.

There is a well-known proverb which highlights this capriciousness we've come to expect with March. It offers an imaginative prophesy of what we might be able to expect at the beginning and at the end. The question heading into the month is will it start with gloom or with the calm before the storm. Will it come in gently and with all the meek manner of the lamb or roar and bluster with the might of a lion?

Perhaps the 'in like a lamb, out like a lion' folklore began with a human need for balance in all things. Hence the suggestion that if we are greeted by a nasty hello to the month, then it is only fair it should be a smooth goodbye.

I suspect, though, this saying is based more on how March weather can change from one day to the next.

The prediction of a major winter storm system targeting our area for today, gave us our answer for this year in advance. Though we woke to a fairly pleasant dawn, by early morning the flakes had begun to fall, pushed by a hostile east wind.  If we get what they've promised it's going to be fierce.

Given that then, if we care to put any stock into old lore, we have something to look forward to. March's harsh arrival should mean it will depart quietly. While I would be less likely to believe the saying if today tiptoed in, my heart was gladdened by the notion that the month will depart quietly.  If it turns out false, I'll deal with the disappointment. In the meantime,  I have something to look forward to.

Here are some fun lamb and lion illustrations to bring us into this new month of change and promise: