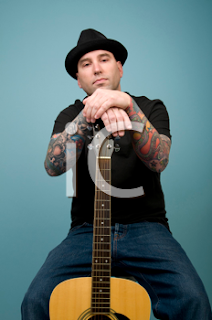 Yesterday a post on Facebook that I shared stated "The biggest killer on the planet is stress and I think the best medicine is and always will be music."

To a fairly significant degree, I agree. So let me just say that my husband and I blew off a little steam last night at a show in a nearby city.

Since we're both fans of live music, I purchased tickets to see this unknown (to us) blues guitarist as a Christmas gift for my sweetie. I had, of course, checked him out on YouTube first, but even so, you're never really sure what you're going to see up close and personal.

Which, it turns out is exactly how we saw him. Though it was held in a familiar concert venue, we were titillated when directed in a different direction than is usual.  Entering into the front of the hall, we climbed steps to the stage, which had been extended, and were guided to a cafe table for four.

The intimate setting proved perfect for hearing this particular artist since he was a band of one. With various attachments to his guitar for cymbals,  a harmonica holder and pedals for drums, he did it all.

Yet, while it was pretty incredible to see, my thoughts ran in several directions during the performance. Steve Hill's guitar work is flawless. With speed and finesse he works his way over frets and strings to awesome results.  This unfortunately got short shrift in the first couple of songs, though, as our attention was drawn to his multi-tasking.

By the show's end we couldn't help feeling what a shame it is that just being a good guitar player isn't enough in today's music business to make a living.

Though my guy and I appreciate the many opportunities to scope out lesser-known talents, it's always with this frustration. To see stellar musicians playing gigs in small cafés and pubs, while lesser talents have been handed a place in the spotlight, mainly because of a pretty face and/or the entertainment marketing machine, is sad.

Of course, success in the entertainment industry has always often been more about luck, being in the right place at the right time or knowing the right people. And obviously, everyone can't make it. There has to be some of the aforementioned.

But shouldn't better than average talent count for something?  To me,  it seems that far too many undeserving these days are making millions while the deserving are struggling for someone to notice.

Hill said last night it has taken him eight years and several awards, but he finally has a date to play in Toronto. Sadly, it took what is essentially a circus act to get people to play attention.

So in salute to all of the musicians out there, who live and breathe the music they play and will do it for nothing if that's all they get,  here are some great musician photos: