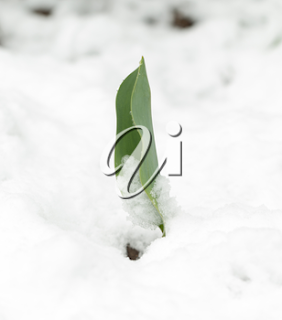 Talk about the weather these days in this corner of the world, seems to be the only conversation out there. We've hit April with all the force and ill temper of January. Everyone, even fans of the coldest season, are disappointed by Mother Nature's practical joke.

Given winter's slow start and unseasonable warm spells,  we had all anticipated a short visit. Instead, like an unwelcome guest it lingers, displaying its bad habits far more frequently than it did during its scheduled visit.

Upon opening the blinds on this particular April morning I stared out at a snowy landscape that sent the spirits dropping. Then a quick check of the weather predicting sub-zero temperatures proved even more disheartening.

However, as dawn arrived, the dark sky made way for brilliant sunshine and I opted to focus my mood in that direction. Snow might fall at this time of year, but the warmth of the sun ensures its imminent demise.  It never has and won't last forever.  Spring might not arrive in as timely manner as we would like, but its promise to us is a goodbye to winter weather for another year.

Taking this encouraging reminder with me as I walked over to the bathroom window,  I was surprised by the sight of a plump robin sitting atop the screen protector on the eavestrough. This one had been hanging around our home lately and I was a bit concerned by its strange behaviour now. Despite clearly seeing me in its zone, it never budged. Worrying that it was injured, frozen to the icy surface or near death, but needing to get ready for work, I decided to check back later.

When I did she was, to my relief,  gone.

Then as I left the house to head for work some time later, I saw her sprinting happily across the blanketed lawn, flitting into shrubs and bushes, chirping in the heat of the sun.  I decided  that if this fragile creature could put on a brave face in this dismal start to spring so could I.  In this life there is good and bad and we must take what we get.

In the spirit of that, I have found a perfect tutorial for this wintry spring Tuesday — a seasonal yin yang symbol to create in Photoshop. Yin yang, the interconnecting of negative and positive forces,  seems more than an appropriate symbol for April 2016.