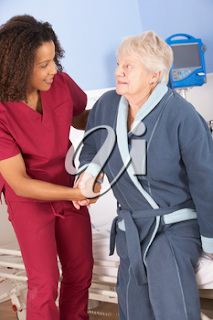 As my younger children were looking to careers, I heard a few of their friends one evening discussing the possibility of becoming personal support workers. This profession wasn't mentioned often, most of those interested in healthcare were looking more seriously to nursing and even becoming doctors. But a few felt that they wanted the less glorified, but certainly greatly appreciated, role of PSW.

At the time, I wasn't exactly sure what that role was. It was 15 years ago and it had been my experience that tender loving care came at the hands of nurses.

However, over time I began to understand that this type of support was essential. The ageing population and the desire for many of the elderly to stay in their homes as long as possible, had created a need for assistance that went beyond what nurses and doctors could handle. PSWs fill this important role. They visit the aged client in their residence to offer such support as needed, whether it's making meals, cleaning the house or assisting with personal hygiene.

And when a person must make the move to an assisted living or long-term care facility, the PSWs are there for the hands-on caring required. From supporting the nursing staff to bathing and dressing patients they are the familiar faces upon whom residents come to rely.

When my mother became seriously ill last year just before her 95th birthday, the decision was made that she would remain in the nursing home with the people who had become her family, rather than send her to the isolation of a hospital.

My siblings and I have not been able to say enough about the care she received in her final days.  The staff, most particularly the PSWs, treated her as they would have their own loved one. Gentle and compassionate in their handling of her, and for that matter of us,  their efforts went a long way to easing the sadness. Mom could not have been shown more love and kindness.

So, while I've already respected PSWs for the beneficial work they do, it has increased tenfold since those days. To me they are angels.  In recognition of the TLC they offer and in support of PSW Day, I offer this collection of photos: