Bring on the Rain With These Photoshop Tutorials 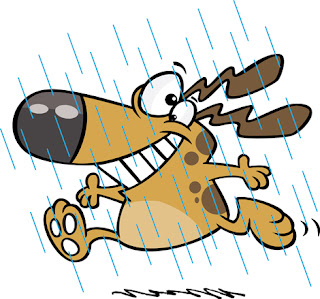 Humidity hangs while the temperature soars. The dog days of summer have made an early appearance this year and let me tell you those dogs aren't just panting, they're thirsty as heck.

While the common phrase actually references the position of the dog star Sirius in late July,  it has come to conjure images of lazy dogs lying beneath shady maples during summer's hottest time.

This year, if our canine friends are hiding from the heat,  they're not alone. We've experienced weeks of intense temperatures, made more so by a cloying mugginess.  ACs are blasting and everyone's searching out cool places.

Not complaining, of course. Winter's a very long time so we'll take all of July's personality and love her for it. There is, however, one little problem. As hinted above there's been a shortage of water. While it's great to be able to head to the backyard or beach without worrying about a deluge raining down around you, farmers' fields, our lawns and gardens are crying for moisture.

Given the number of decades I've been present on this earth, it's likely there have been other dry summers experienced in my life. I don't, though, recall them. Thus, as I rejoice in the endless days of sunshine, the level of concern increases. Heading out on yet another evening to water my plants and flowers, rock hard ground beneath my feet, grass crunching with every step, worry about how much longer this can go on does take up space in my thoughts.

We've been able to use water from the rain barrel to keep the flowers fresh. But showers have teased us with their infrequency and limited accumulation so that source will soon be dry.  One can only assume that local government will eventually issue a total water ban, meaning as the barrel empties all other options will be removed.

Mother Nature has shown us time and again who's in control here.  Mere mortals can't change what she throws our way.  We can send out our prayers to the universe or try a little raindance.  However, precipitation will only come when she's good and ready to bring it.

At least in the natural world. Creatively, we can inspire some rainfall magic through Photoshop with the great tutorials listed below. Who knows, maybe the skies above will take the hint.

Add Dramatic Rain to a Photo in Photoshop