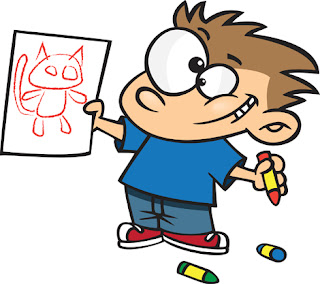 "Draw an alligator please. It's my favourite animal."

Disappointing my granddaughter is something I strenuously avoid. So far, her naivety has her holding me in the highest regard. I know some day the light in her eyes won't shine quite as brightly as it does now, but I certainly don't want to look in them and see it fade just yet.

Thus, when this darling asked me to draw an alligator, momentary panic struck. There's little more I want to do than please her, but my artistic ability can be described only as rudimentary. Her mother, a preschool educator, draws some pretty realistic animals for her. Would the lines I etch out in sidewalk chalk pass muster with this four-year-old, whom,  I should mention, does exact some pretty high standards from her loyal followers.

Looking into those enigmatic baby blues of hers as she passed me the necessary tool for my creative effort, a chunk of Pepto pink, I knelt to the task, furrowed brow beaded with nervous sweat. As my work of art developed, however, I began to relax seeing the sweet smile of anticipation on Little Missy's face. Beauty is in the eye of the beholder and whatever this creature was, done by my hand, it was enough.

Sure, she argued with me that it didn't look like an alligator. She even laughed at the idea that I thought it did.  But I tried and apparently that was enough.

The kitty I drew a few weeks later for her, copying from a puzzle we'd just put together, was far more realistic and illicited not giggles but a hug.

Whether you're called upon to draw by hand or create an image using software, talent is obviously a huge asset. However, there are also many step by step tutorials to make the ability a little more attainable to the less artistic, or to help others hone their skills. Here are some wonderful drawing tutorials from the iCLIPART.com  Pinterest page.
art artwork drawing drawing tutorials education information tips tutorials TutorialTuesday