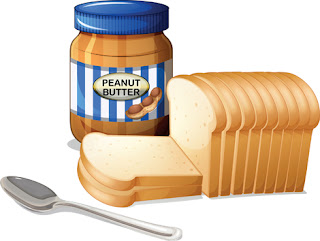 "All sorrows are less with bread." — Miguel de Cervantes Saavedra

Today, as I thought about what collections of photos or illustrations I might highlight, food came to mind.

Actually, truth be told, food's on my mind a lot these days. More specifically, my relationship with it.

Growing up, I was a finicky eater,  a determined, some might say, stubborn, little girl who refused the majority of food my mother laid out before me.

The progeny of people from solid German farming stock, I typically stared with disgust at plates heaped with roasted meats, potatoes, coleslaw and of course some other requisite vegetable. Swinging my feet under the table, I defiantly chewed on a chunk of meat until allowed to spit it out. I would play with the peas, pile the potatoes. No punishment nor admonishment worked.  Neither did pleading and promises. You can, as every parent learns, lead a child to food; you can't make them eat.

Weary of the battle that ensued nightly, after an hour or so Mom would finally cave in to my request for yet another PB&J. Or when she didn't feel up to the fight at all, we would find such delicacies as fish and chips, mac and cheese, cheeseburgers or hot dogs set out on the table. Those were good times.

By high school, the bad habits took on even stronger form. Lunches were a doughnut and cola. Then after school, friends and I popped in to a local restaurant — owned by the parents of one of the aforementioned friends — for burgers, fries and shakes. Since that eliminated any question of needing supper, I could skip Mom's succulent roast beef and creamy mashed potatoes, satisfying any pangs later with potato chips and a cookie or two.

Fortunately I suppose, none of this added to the 93 pounds I carried on my 5'2" frame. Unfortunately, that didn't stay the case.  Giving birth to four children, as well as the passage of time, have changed that reality. Now, I must often eschew the favourites of my youth in favour of the vegetables I still despise but have learned to make appetizing. Usually with the addition of cheese.

I can still indulge and maintain my weight to a point. But, when the scale does take a leap and a few pounds need to disappear off me, things really get less palatable. I've learned that saying goodbye to cheese, chips and chocolate rarely leads to a long separation, though. It's simply a weight loss program destined to fail.

Recently, my son and his girlfriend became engaged. Besides a reason to celebrate, the announcement also gave me some incentive to drop a few pounds. This meant first stepping up the exercise program. That was easy. But, when it came to what could be done in the eating department to complement the action, I decided to think outside the box. The bread box that is.

Besides the aforementioned affection for sweets and fats, I love carbs. Pastas are my go to for supper. And bread? Well what would life be without toast in the morning and for snacks? Or lunch without a sandwich?

So, for now, I've bid farewell to bread. It's being going well at this point and I'm coming up with some unique meal ideas to take its place. Given the endless variety of food,  I will be, as de Cervantes Saavedra said,  sorrowful perhaps, but I can apparently live without it.

For you, though, as promised, here are two terrific collections of food illustrations: