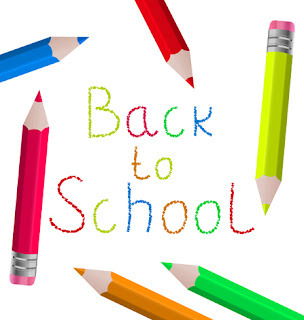 So spoke my favourite four-year-old after seeing an advertisement for a My Little Pony backpack in a promotional flyer.  Set to start her first day of elementary school, she and Mama have been discussing all aspects of what her new life will be, including the necessities she'll require.

Our Little Missy is truly a dash of sugar and spice. She's an amalgam of sweetness and tang, a personality that can switch between incredibly confident and in charge to shy and apprehensive. She's particularly disarmed by new situations and strangers.

Thus, the notion of her being sent off in a bus to a large school with a group of children she's never encountered before is causing no small amount of emotional anguish for her mother, my daughter. Worried that the entire experience might prove more traumatic than terrific,  for both of them, she's done her best to focus on the positive, while explaining the facets that might be overwhelming.

They've discussed the classroom and the teacher, who just happens to be a guitar-playing dude, which, given our darling's love for her musician uncle should hold great appeal.  They've chatted about making new friends and potential playdates.  Her Sweetness knows this next step is going to teach her all kinds of new things, a fact she's definitely pleased about.

What has caused the most excitement, however, has been the requisite retail therapy. The promise of heading out to the mall to pick up backpack, lunch pail, and of course, new clothes, has inspired an eagerness to get this new beginning begun.

I remember those day too. Merchants loved to see me coming. Outfitting the kids, and picking up all of the school supplies they required for a new year was an exercise in excess. Even with a list, there was always a concern that something was missed, so if a question mark hovered over a particular item it was added to the stash for good measure.  Carts towering with merchandise were wheeled through department stores, as my enthusiastic entourage sensed my weakness and pointed out wish list items at random.

Clothing stores were more my thing, while my pack, with increasing ennui, became increasingly less cooperative. Despite the resistance to trying on yet another sweater or pair of pants,  however, when that first day of school arrived they were all pretty happy with their spiffy new duds.

So, this first back-to-school shopping experience for my granddaughter is something I'd love to be part of.  While I know I'd be welcome, however, it's going to be a special time for her and her mommy.  Until they get to the mall this weekend, they are perusing flyers and promotions to discover for certain whether our Little Missy really is wishing for 'one of doze' or if she'll pick instead  'one of dese'.

There are still a couple of weeks left in this corner of the world before kids head back to school, so plenty of opportunities for retailers to promote their products. These terrific illustrations will add eye-catching graphics to advertisements: