How to Adjust Contrast in Part of an Image in Photoshop “A good snapshot keeps a moment from running away.”  —  Eudora Welty

It's true, of course. A photograph preserves a memory for us. We can call a pleasant occasion forth any time we need to, just by glancing at a picture. It is happiness in a frame.

What a photo can't do is stop time. Landscapes change. So too do the places we visit.  People come and go in our lives and much-loved faces will get older. In the case of the latter if that favourite picture is on display somewhere, it will eventually become a rather outdated.

Perhaps not as much as the family portrait that hung at my parents for some 30 years. When we scheduled a sitting for Mom's 70th birthday it was with the condition that that old picture be retired. Then in my 30s, I bore little resemblance, after all, to the little six-year-old in hoop skirt, with white ankle socks and patent leather shoes.

Sometimes though a picture is so precious that letting it go is difficult. Two years ago this December our daughters took their babies to Florida for a vacation. The oldest of the adorable trio was two, her baby brother and little cousin seven months.  Since our younger girl is a photographer, obviously many great pictures were taken during their getaway. One day, though, she caught a moment of the three tots lying on their tummies on a towel by the pool.

My husband and I fell in love with it. The picture sits in a place of prominence in my kitchen where I can see those sweethearts with frequency. Since children at this age, grow up so quickly, we agreed that this would be a fun picture to do on an annual basis.

Well, it actually took a year and a half before we could finally get these lively little ones to lie down in the same position long enough for the moment to be recreated.  We found the opportunity during a large family picnic this summer. With all of the distractions it didn't quite reach the technical perfection of its predecessor. It was enough that we managed to get a  four-year-old and two toddlers to stay still a moment.
The end result, while a true reflection of their personalities and of their sense of mischief and fun, is, as you can see below, uneven in contrast. Since I'm hoping to replace the old one with the 2016 version, I decided to see what can be done with it in Photoshop.  Here's what I started with. 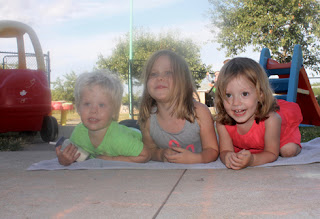 The first step was to use the lasso tool to select the area I need to adjust.  I decided to do the two babies on the left separately. Once the selection was made, I went to Image>Adjustments>Brightness/Contrast.  I was then able to move the slider until I got the effect I wanted. The best order in my opinion was to alter contrast first then follow with the brightness slider to correct exposure issues.

Simple as that. If I don't take it any further than this first attempt I'm satisfied with the result.  However, having experimented and achieved a modicum of success, I might spend some time to see if I can get it even better.
adjust contrast. how to adjustment layers brightness/contrast education information learning Photoshop photoshop Tuesday tutorial Tutorial Tuesday