Words Have Power. Fonts Do Too. Find the Perfect One in These 2 Terrific Collections 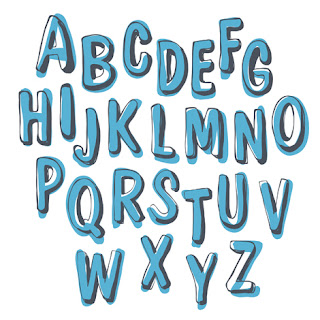 "Sometimes, you read a book and it fills you with this weird evangelical zeal, and you become convinced that the shattered world will never be put back together unless and until all living humans read the book." — John Green, The Fault in Our Stars

"Words are pale shadows of forgotten names. As names have power, words have power. Words can light fires in the minds of men. Words can wring tears from the hardest hearts."

I remember the first time I heard Shakespeare. A friend had invited me to attend a a production of The Merry Wives of Windsor at beautiful Stratford, Ontario with her and her mother. I was not yet in high school and while much of the dialogue was beyond my comprehension, I was captivated by The Bard's poetic prose.  I sat at the edge of my seat, transfixed not by what was happening on stage but by the power of the words the actors spoke.

The love affair continued in high school as my classmates and I were introduced to such memorable works as Romeo and Juliet, King Lear and the Merchant of Venice.  Though English Lit might already have been my favourite subject, studying and dissecting that elegant dialogue became a great fascination. I recited monologues in front of mirrors and read from a collection of Shakespeare's plays in my spare time. In the naive mind of a teen I believed myself to be quite erudite.

While I still enjoy the words of Shakespeare, it's usually in a theatre these days.  I've long forgotten most of what I learned in those English classes of yesteryear. In my downtime now I prefer a good thriller or tale of espionage. And with the wisdom of age, I no longer have any highbrow notions about the levels of my intellect.

What I do still know, however, is that words are very important to me. Light, fluffy romance novels will entertain occasionally when surrounded by the distractions of a lovely summer day at the beach. But please, no insipid dialogue. Implausible the tale might be, but if it's  well-written I can forgive. At least when reading it in a hammock or at the lake.

Seldom, in all my book-loving years, though, did I give much thought to hwo those words appeared. It was only when beginning a career in journalism some 30 years ago that I learned the type of font used can also impact readability. For example italic should be used primarily for impact as it's much harder to read than regular type.  Many studies showed that serif, those with little finishing strokes on the ends of the letters, was preferable to sans serif — though there are also arguments that there really is no difference.

Regardless of opinion, since words have power, choosing the right font to deliver them shouldn't be ill-considered. This past weekend while travelling a busy highway, my eyes were drawn to a company name on the side of a truck. The type style had an almost Asian flare. It was weak, did not suit the brand and was somewhat difficult to read.

I suspect the decision makers were thinking of something unique, something with a special flare so folks would notice. To a degree it worked. It certainly got my attention, but not for any of the right reasons.  I don't remember the company name, just the nasty typeface. Others might disagree but to me it was out of place, looked unprofessional and was a negative reflection on the company.

There are so many wonderful fonts available on websites such as iCLIPART.com and Clipart.com finding one that brings the right attention to you or your project is a breeze. Check them out here: