You'll Have Such a Crush on These Amazing Love Illustrations 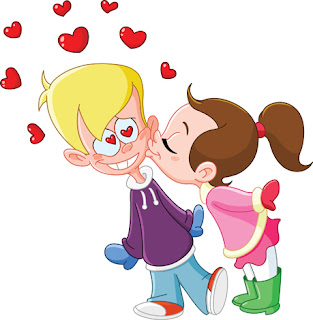 For those who've been hiding in a Himalayan cabin over the past several years, what I'm doing here is bringing attention to a word by 'tagging' it. The symbol once commonly called pound or the number sign, is now a social media darling, known as a hasthtag. It's a label to make finding messages with a specific theme easier.

Given that finding love is always a good thing and that messages about it kept popping up this past weekend, I therefore decided to make it the theme for this blog today and as the focus of some image collections I will highlight.

But first, if you will indulge me, I have to tell you how many times love was in the air around me over the last two days.  The romance began on Saturday afternoon, as I attended a Stratford Festival production of Shakespeare in Love. It was absolutely brilliant and despite being a bit of a rom-com, the story of true love shines through. When the love interest, disguised as a young man, asks of her paramour, Shakespeare, how he loves her his response couldn't better describe the passion and angst of romance. "Like a sickness and its cure together." Ah, my.

Interwoven with this fictional tale of the playwright and his Viola, is one of the greatest love stories of all time,  Romeo and Juliet. The ardour between the two star-crossed lovers is conveyed in line after line.

"If I profane with my unworthiest hand
This wholy shrine, the gentle fine is this;
My lips, two blushing pilgrims, ready stand
To smooth that rough touch with a tender kiss."

So that was how I spent a 'love-ly' Saturday afternoon.

Then Sunday my husband and I attended a large music festival in a nearby urban centre. Several venues hosted different performers so there was a great deal of walking and watching. Passing a shop window as we were making our way from one show to another,  I noticed a plaque bearing the words, "Love is everything."

Now, scuttling along behind my dashing hubby gives me occasion to reflect on things. So, as I pondered those three simple words it occurred to that they had conveyed what is probably one of the greatest truths of life. If we all only loved, if there was no hate, no malice, no envy, there would be no trouble. Love has far more value, therefore, than anything else. Thus it truly is everything.

Arriving at our destination a few minutes later we entered the fully-packed pub where one of the bands was playing. The only available space was at a bar behind the sound system. The engineer was wearing a muscle shirt with just enough skin revealed so I could make out the words of the tattoo emblazoned across the top of his back. "Music is my love."

Often the love we feel, the love that is everything to us, isn't for a living being.  We can find bliss any number of places, in any number of ways.  Clearly this guy had no question what his was.

Later that afternoon, I noticed a man, who appeared to be homeless. Scruffily dressed, shambling along in a large circle on the sidewalk, he suddenly dropped to his hands and knees. Transfixed, I watched him inscribing words on the cement with a pink piece of chalk. "Love," he wrote, "makes everything equal." Then he stood and walked away.

You can well imagine how that got thoughts stirring. Besides contemplating if there was truth in his message, it was at this point that I realized love had been everywhere for me.  Thus, when it came to thinking about what images to highlight starting off a new week here, the key word had to be love.