5 Collections of Terrific Halloween Clipart to Inspire Your Creative Projects 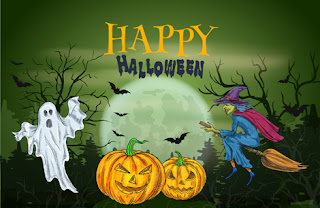 The people who use images in projects are always thinking ahead. Preparing products and promotions in advance of seasons and events is standard. So, while Halloween is still days away, these folks are right on top of this autumn celebration.

Linking to some fun Halloween clipart collections then, seemed an appropriate focus for today's missive. But first, before we get to that, I hope you will indulge me as I share some personal thoughts and remembrances about this particular time of year.

One of my earliest recollections of Halloween was my first one in Kindergarten. My classmates and I wore our costumes to school and showed them off as we paraded through the senior classes. Call it a trial run on the ooh-and-aah factor because if we heard these from the Grade 8 girls or saw reluctant grins on the faces of the boys, it was an assurance we were looking pretty darn cute. Which meant that getting our treat bags stuffed to the brim was not going to be an issue. 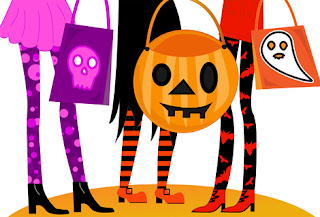 The standard practice as a youngster in those days was to hit as much of the town as possible. However, travelling to one area just a few blocks from my modest, middle-class neighbourhood, was imperative. Older kids, our siblings and friends from that area encouraged it. Home to the affluent, it was well-known that the greatest satisfaction for a sweet tooth was here. Rather than single chocolate bars, these people often met us at the door with goody bags full of decadence.

That's why it's strange that my only, albeit rather harmless and humiliatingly unsuccessful, foray into Halloween mischief targeted a home in that neighbourhood. If 'trick or treat' is the mandate for this holiday, then my gang and I had clearly fallen outside the terms. But who can understand the ways and  minds of teenagers?

Having reached the age caught between 'adorably cute in costume' and 'too cool to care', some friends and I decided to grab a few bars of soap and hit the town. And again, for whatever reason, we chose as a first stop a home that had always delivered in the treat department. 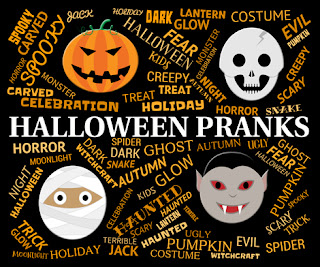 Perhaps it was the absence of lights in the back. Perhaps it was the temptation of the open garage door. Either way, with our brains taking a back seat to common sense, we believed we had our target. Entering the building, we raised the bars to the window just in time to be illuminated by headlights from a car turning into the driveway.

Knowing back then that getting caught would be a very bad thing for us on the home front, we sidled out with the speed of centipedes before hightailing it down the street. The soap was dumped and we headed home, never to stray into  the criminal life again.

It was after having kids of my own, though,  that the best memories of Halloween were formed.  They are far too many to list, but pictures of a tiny princess, a sweet lederhosen-clad boy, a pretty kitty and super-cute Dracula are among the reminders of those special years.

Back then, hubby and I alternated who would take our brood around town and who would stay home and dole out treats to the other sweethearts.  Each was equally satisfying — one could see everyone's reaction to our darlings, the other enjoyed seeing the variety of little characters who came to the door.

After the kids grew up and left home I transformed into a bit of a Halloween Scrooge. I had little interest in the celebration, and could have cared less about participating on any level. 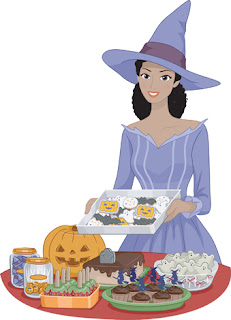 Then a few years ago circumstances forced me into a costume and buried feelings began to emerge. I remembered that it's rather fun to be someone or something else for a bit.

The arrival of grandchildren has also put the pleasure back in Halloween. We have toured around with a little bee, a lion and pumpkin. Given that they received treats in the process and being with them is a treat for us, life couldn't have been sweeter  on either side.

So, as I reflect on past Halloweens,  I approach this one with renewed elan. To go along with that here are some of those adorable clipart collections promised earlier: