Ah, the Camping Life. Enjoy it Here in These 2 Great Clipart Collections 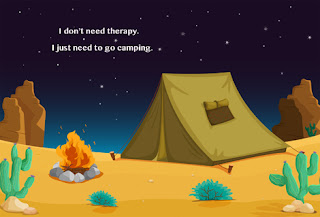 A quiet, open space nestled among towering trees. The lullaby of leaves rustling in a gentle night breeze soothing the raw nerves, easing away the tightness that has taken a grip on shoulders and neck. Stars twinkle overhead as a crackling campfire mesmerizes. A tent with cots and bags waits on standby for sleep to come.

To many, this is camping. Our daughter and her husband, before parenthood, made frequent visits to the deep north woods of Ontario to get away from it all. There was no hydro, no running water, no cellphone service. The site they chose even lacked an outhouse.  What it did offer was solitude, peace and quiet. They slept next to the soothing flow of the impressive French River, accompanied at times by crying loons and heralding bullfrogs.

When they became engaged, they chose this place as the spot for the nuptials, arranging to take over a picturesque lodge for a wedding getaway weekend. It was my husband's and my first trip there. Though we might often have shaken our head at their pleasure in rudimentary vacationing, we couldn't question the magic of the area. Stepping out of the car, I could see my workaholic husband's shoulders drop, as if all the cares and concerns had been lifted. The quiet and calm wrapped around us like a hug from Mother Nature and we welcomed it with our whole being.

That said, as much as we enjoyed that visit, and made a point of returning every summer for several years after, it was always to stay at the lodge. Pitching a tent in the wild might have been appealing in my youth, but all the bears in the area couldn't have dragged me out there now to sleep, eat and swat black flies.

Camping is an affordable holiday though for many people and can fortunately take on many forms. There are those who pack up tents, those who load up RVs to tour various places and those who take those travel trailers and park them in a favourite spot.

It was the latter that provided many enjoyable vacations for our family as the children were growing up.  They were golden summers that began when my parents decided to upgrade their trailer and I, having enjoyed some weekend libations, impulsively agreed to buy the old one. Extra incentive came in hearing that there was going to be a vacant lot in front of my brother and sister-in-law's trailer. 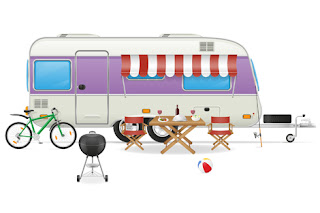 Humble, though serviceable, that little RV suited my husband, me and our two youngsters well at the time.  We were surrounded by a pack of kids the same as as our two and the close community feel of the park provided them with a freedom that didn't exist many places. The adults also enjoyed an amazing friendship that has, in some cases, endured to this day.

That utopia lasted for a good length of time, though things definitely changed when two more babies arrived in quick succession, taking me out of party mode. Eventually,  though, our older two picked up some jobs that often meant they couldn't get away for the weekend. Then a change in career saw me working every other weekend and the hassles of packing and unpacking for a crew of six finally lost its appeal. It suddenly seemed in our tiny little trailer that I still had all the chores to do that I did at home, but they were twice as hard.

Thus, with some heaviness in our hearts, we sold and said goodbye to a lifestyle that had for such a long time meant so much to us. We have returned to the area every summer since,  renting a cottage or room for a brief stay. Yet in recent years we have begun considering the possibility of returning to the park. It's beginning to seem to us that once camping is in your blood, whatever form it takes, it seems to stay there.

In a very short time, camping season will be here again. It's the perfect time then to share these collections of images from two fantastic clipart sources. Both are online subscription services that offer quality, affordable options for using images royalty-free in personal and professional projects. 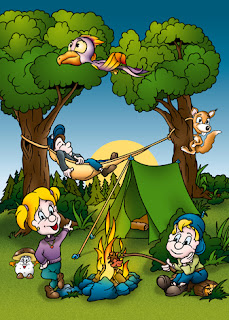 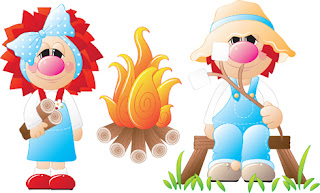