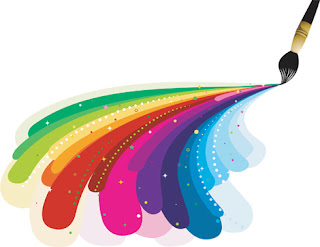 flourish (n): an act or instance of brandishing: an ostentatious display: a decoration or embellishment, especially in writing: rhetoric,  a parade of fine language; an expression used merely for effect: a trumpet call or fanfare: a condition or period of thriving.

Working in the world of images as I do, when I think of the word flourish it's with an eye to those swirls and curls used as graphic accents to add visual interest to a project.  What I've also noticed about them is that they can often be all that's needed.

One rule of thumb I've found effective throughout life is that less is indeed more. There is a minimalist approach in my decorating attempts. I don't festoon myself with chunky necklaces and scarves, being more drawn to light chains and tiny baubles. Lining my closet are clothes of solid hues; no lively prints nor crazy stripes adorn them.

This preference was further entrenched in my mindeset during two decades in journalism. Get to the point early and succinctly was the best way to ensure readers were going to actually get the point.  On the advertising side of the business, it was only good sense that the design not be so full of elements that the eye is unsure of what to take in or where to look first. Design and production staff often talked about the effective use of whitespace.  One of the most successful ads the sales manager created during his tenure was actually comprised of 90% negative, or empty, space much like the Google website design.

I've often pondered the notion that novices when designing,  might tend to over think the project. A desire to add more, to look at what's been done and feel that something is missing seems a natural tendency.  It's enlightening, therefore, to see what people with experience can do.  Our daughter, always an artistic sort who has dabbled in graphic design for some time, decided to craft the stationery for her wedding four years ago. Invitations, thank you cards, etc.,  were stylish, but simple, created with images from an online royalty-free subscription source.

One of the trickiest projects was the name cards for the dining tables. Having gone with a black-and-white theme, and given the limited space on the cards, she settled on a pretty flourish as the best, and the only necessary, decorative element.

These swirls, designed to decorate and embellish,  run the gamut of styles, from unflashy to elaborate. Regardless of which is used they undoubtedly add a touch of elegance without being overwhelming. They are ornamental without being garish, attractive without being showy.

While lovely swirls and flourishes are available on sites such as iCLIPART.com and Clipart.com it's also possible to make the design personally. Using image editors, such as Photoshop and Illustrator, you can add your own special flourish to your project. Since it's Tutorial Tuesday, here are some resources for free flourish brushes and tutorials to help you design originals:

How to Make Flourishes in Illustrator

Create a Flourish in Photoshop Elements