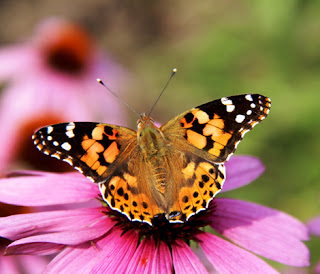 They are not just one more welcome summer visitor. They are also symbolic to many, offering a connection that is both spiritual and life-affirming.  With their presence comes an affirmation of hope and comfort.

The suggestion of butterflies as a representation of life and resurrection first was presented to me following the passing of a young friend just over a decade ago. It was a day after the service when her aunt while working in her garden, looked up to see dozens of pretty butterflies fluttering around her, filling the yard with colour and energy.  She was immediately soothed by their beauty and the message of hope that is attached to them.

A friend too had had a unique experience with butterflies recently — their appearance over the past several days not just sudden, but abundant. Fabulous Monarchs were finding her,  not just while she tended her gardens, but also in quiet moments of respite or during rejuvenating walks.

Each time she was captivated by their actions. They weren't flitting quickly past her, nor shyly darting into view and back out. There had been no coyness in their dance; they had instead boldly lingered and frolicked around her like children come to play.

During our conversation, it struck me that it had been some time since I'd seen a Monarch. Cardinals, another creature to which spiritual significance has been attached, have,  if not always shown themselves to me of late,  let me know they were there with me in their whistling call.  I have found with them that a level of faith has not been required to believe the significant meaning since I am consoled by their presence.

But the pretty Monarch has been elusive.  Until, of course, my friend's story was shared. It's interesting how conversations will often conjure that which we've discussed. There's the person you haven't seen in some time. You mention their name for some reason and they contact you the next day. Or the song that you've been wanting to hear begins to play on the radio after you mention it to someone.

So it was really no surprise to me when I stepped out on to my deck this past Saturday morning and was greeted by this flamboyant creature. Like those who have visited my friend, this one was in no hurry to pass through. As I stood waiting, coffee and book in hand, it floated around me, hovering and flittering. When after several seconds of watching its dance I decided to sit down, it seemed to follow me, swooping back and forth as if trying to get my attention.  The book was forgotten as I watched, smiling.  It probably stayed with me for five minutes before moving on to make another person's morning.

Later that day two more popped by for another quick visit.  I don't know if these guests did indeed represent something special — a message from a loved one who has passed, for example. But I like to think that their presence was somehow connected to my late parents and it left me feeling calm and centred, at peace, content.

It is not just to the Monarch that this significance is cast. All butterflies are believed to be a deep representation of life. For that reason, as well as for their photogenic qualities today's image collection, I've chosen to highlight these fantastic photos of beautiful butterflies from iPHOTOS.com 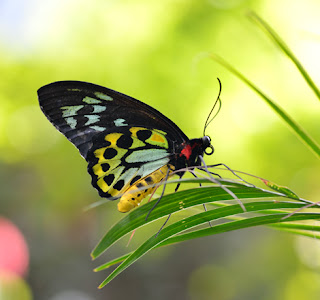